What Exactly Are Game Mechanics

There are many definitions floating around of what game mechanics are. We have been discussing it along with game studies in our class the last few weeks and it strikes me as an important part of game design. A simple definition I found was “Game mechanics help provide gameplay by providing a construct of methods or rules designed for the player to interact with.” (No Author, 2015).  This definition gives you a  simple way to look at game mechanics, connects it to how you play a game and interact with other objects in the game. The video below simply breaks down  game mechanics and its connection to other parts of game design. It goes through all aspects of game design and their value to the player.

With so many definitions for game mechanics available, it is hard to find any conclusive meaning for it, however I did come across an interesting article on game mechanics by Miguel Sicart. He went in-depth into its definition and compared definitions from multiple sources studying within the field. Sicart definition of game mechanics goes into more depth then the earlier example. He states, “game mechanics, using concepts from object-oriented programming, as methods invoked by agents, designed for interaction with the game state.” (Sicart, 2008).  Here he is connecting mechanics in games with concepts of OOP. Which he thinks is important because with this formalistic approach you can analyse both human and artificial agents. I have never thought too much about game mechanics while playing the many games I’ve experienced in my life. However I think you can tell the difference between a game with good mechanics and one with bad mechanics. If you end up frustrated with a game there is probably something wrong with how it interacts with the user. It is the job of the game mechanic to make sure the different mechanics work well together and that it is well thought out. Many see game mechanics as a system to reach an end-game state, however as Sicart states when speaking of the work of Bateman and Boon, “Game mechanics are designed for gameplay, but they can be used for toyplay” (Sicart, 2008). I strongly relate to this statement, many times while playing a game I have tried to ‘break the rules’. In Fallout 4, I constantly try to climb mountains that are not meant to be climbed or closed off corridors that have a small gap, I will try to get in! A lot of the time it works and I find myself in a place where I am not meant to be in or at least not so early in the game. I enjoy these challenges and exploring boundaries of the main game. 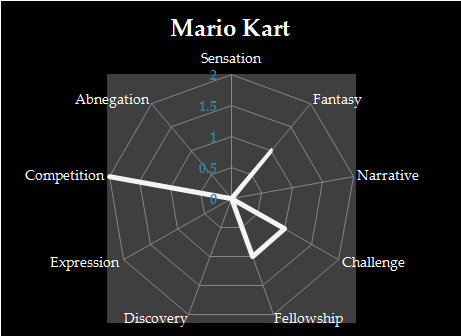 The MDA Framework by Robin Hunicke, Robert Zubek, Marc LeBlanc is a framework used in game design, analysing separate parts of game design. Our lecture mentioned it in class and was also mentioned in the article by Sicart. It breaks games down to 3 parts, Mechanics, Dynamics and Aesthetics. Mechanics we already know about, McNeil states, “Dynamics describe the behavior of the resulting system, which I like to think of as the strategic implications of the mechanics” (McNeil, 2014).  And Aesthetics is the emotional response involved by the player. This framework can also be seen as Rules, Systems, “Fun” or Code, Process, Requirements. Their paper goes into more depth about gameplay and the connection between these 3 areas. From the designers perspective they start with mechanics and move then to dynamics and then to aesthetics. While it is actually the opposite for the player. There is cause for designers to rethink their approach and start with aesthetics and work back. This helps view the game in the same way the player does. Attached to aesthetics is the different ways a game can invoke emotion through sensation, fantasy, narrative, challenge, fellowship, discovery, expression and submission. By working backwards and know what emotions you want to invoke, it could be easier to create the right mechanics to deal with it. To conclude, in looking more in depth into game studies and the mechanics behind games it has opened my eyes to how in depth the creative process can be in construction a game. That is before you even start programming or modelling the game itself. A lot of thought has to go into what you are trying to achieve and what kind of aesthetics you want to invoke and what mechanics to use to get your desired outcome.