Since starting my studies in Digital humanities I have been shown a lot of fascinating projects and tools in the realm of DH. One area that caught my attention last year was interactive stories. We were shown digital stories like Bear 71, Rome and S (an interactive book by Doug Dorst and JJ Abrams) which I loved and now this medium has me fascinated. I have stumbled across more websites on the internet that use interactive stories like Al Jazeera and BBC, that have interactive content on their site and some other websites which I’ve mentioned in previous posts like http://www.interactivenarratives.org. 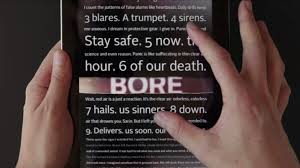 PRY on a tablet

At few weeks back I was put on to an app that the narrative is an interactive story. This app is called PRY. I hesitated at first wondering if forking out the 2.99 euro would be worth it. My curiosity won out in the end and I downloaded it to my phone. I was not sure what to expect. All I was told about it was that you could interact through opening and closing his eyes, moving between the real world and a dream world. The backstory to PRY goes as follows:

“Six years ago, James returned from the first Gulf War. Explore James’ mind as his vision fails and his past collides with his present. PRY is an app hybrid of cinema, game and novel that reimagines how we might move seamlessly among words and images to explore layers of a character’s consciousness. Open or shut James’ eyes, pull apart his memories, or read his thoughts infinitely scrolling in every direction. Through these unique interactions, unravel the past and discover a story shaped by the lies we tell ourselves: lies revealed when you pull apart the narrative and read between the lines.”

The story is intriguing and the delivery of it is very impressive. It is broken up into chapters which you can jump in and out of as you please. You can pick up from where you left off or go back to a previous chapter. Everything is put together very well, it uses video, images, texts, sounds and the interactive options throughout. They all combine very nicely to engage you in the narrative. At some points it was actually kind of unnerving and really sucked you into what was going on. You start to question what is real and what is in his head. 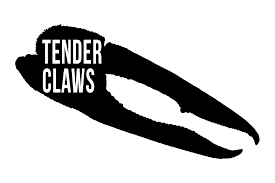 As well as opening and closing his eyes, that you use to switch between the real and the subconscious worlds. There is a really cool part where you use your finger to scroll through some braille and the words are spoken out. The different ways that are used to follow the narrative are unique and engaging.

PRY is the creation of a company called Tender Claws set up by Danny Cannizzaro and Samantha Gorman who started collaborating together 10 years ago. Their motto is to blur the boundaries of design, publishing, cinema, installation and virtual reality. With PRY, they have succeeded in blurring these boundaries. I cannot wait to see what they have lined up for us next.