For my first assignment in digital tools and methods, I were tasked with exploring crowdsourcing initiatives and contributing to one closely related to my arts minor or of personal interest to me. I was guided to a website called Zooniverse to find a crowdsourcing initiative of interest. Zooniverse is a citizen science web portal that grew out of a project called Galaxy Zoo and now host many projects across many disciplines (Wikipedia(Zooniverse) 2017). 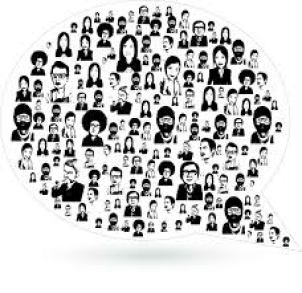 What Is Crowdsourcing? – Source -Testbirds GmbH

As I write this, Zooniverse has 51 active project requiring crowdsourcing engagement to help with important research across many disciplines. Zooniverse is one of the most popular citizen science crowdsourcing sites. Improvements in technology and internet communications has helped crowdsourcing become a popular way of giving an outlet to the masses to engage in an individuals interests and also for researchers to get help with large scale projects that would need massive funding without the help of crowdsourcing. Wikipedia (the biggest crowdsourcing platform) is the 5th most visited site on the internet behind some big players like Facebook, Youtube and Google (Wikipedia, 2017). With the success Wikipedia, it was only a matter of time before others found interesting ways to harness the power of crowdsourcing. Last year we used a crowdsourcing initiative called Humanitarian Open Street Maps. Engaging with HOTOSM opened my eyes to the passion people have to help in humanitarian projects and the scope of volunteering opportunities out there.

My arts minor subject is Religion and Global Diversity, so when it came time to explore Zooniverse I could not find a project connected with my field. Instead I found something that loosely connects with areas of study in my arts minor that was of interest to me. The project, Operation War Diary (even the name is a mission), brings together the National Archive, the Imperial War Museum and Zooniverse to enhance the catalogue descriptions in the National Archive, to add evidence of soldier’s experiences to IWM’s Lives of the First World War project and to present academics with clearer information on how the war was fought (Operation war diary, no date).

Upon reading the purpose of the project, I went through the tutorial and started tagging my first page. The National Archive had digitally scanned all the British WWI diaries and the objective of the Zooniverse members is to tag pages in the diary, briefly explaining the context of the passage from the page. The interface is quite simple to navigate, the ‘Classify’ menu button on the site would bring you to the current page you were tagging. When starting a new page you first had to decide what type of page is it. Most pages I came across where either cover pages or diary pages but depending on the regiment diary there could be many different types of pages. The second section moves you to the different tagging options available for the current page, mostly I used the date, time, place and unit activity tags. Reading through the diary you tag sections that best fits the context of the diary. Once fully tagged, you can look at a timeline of tagged events to see if it makes sense and press finished once you are satisfied with your work and move on. A few problems I came across tagging the diary pages was that first, I struggled to tag the right place names from what was written in the diary. Where possible places tag were geo located using google maps, however it can be hard to determine the author’s handwriting. It could be the case the place names have changed since WWI. Being a British soldier in a foreign country, having to remember the strange names of french towns and cities must have been hard. Second issue I came across was it can be hard to read the author’s handwriting sometimes. It was either too small or just a bit messy and the age of the diaries, worn and written 100 years ago would have an impact on its legibility. In general I am impressed at how well the diaries are preserved. The tools to scan the diaries must have been of high quality and a lot of time and care must have been put into the whole process to get them set up in Zooniverse. 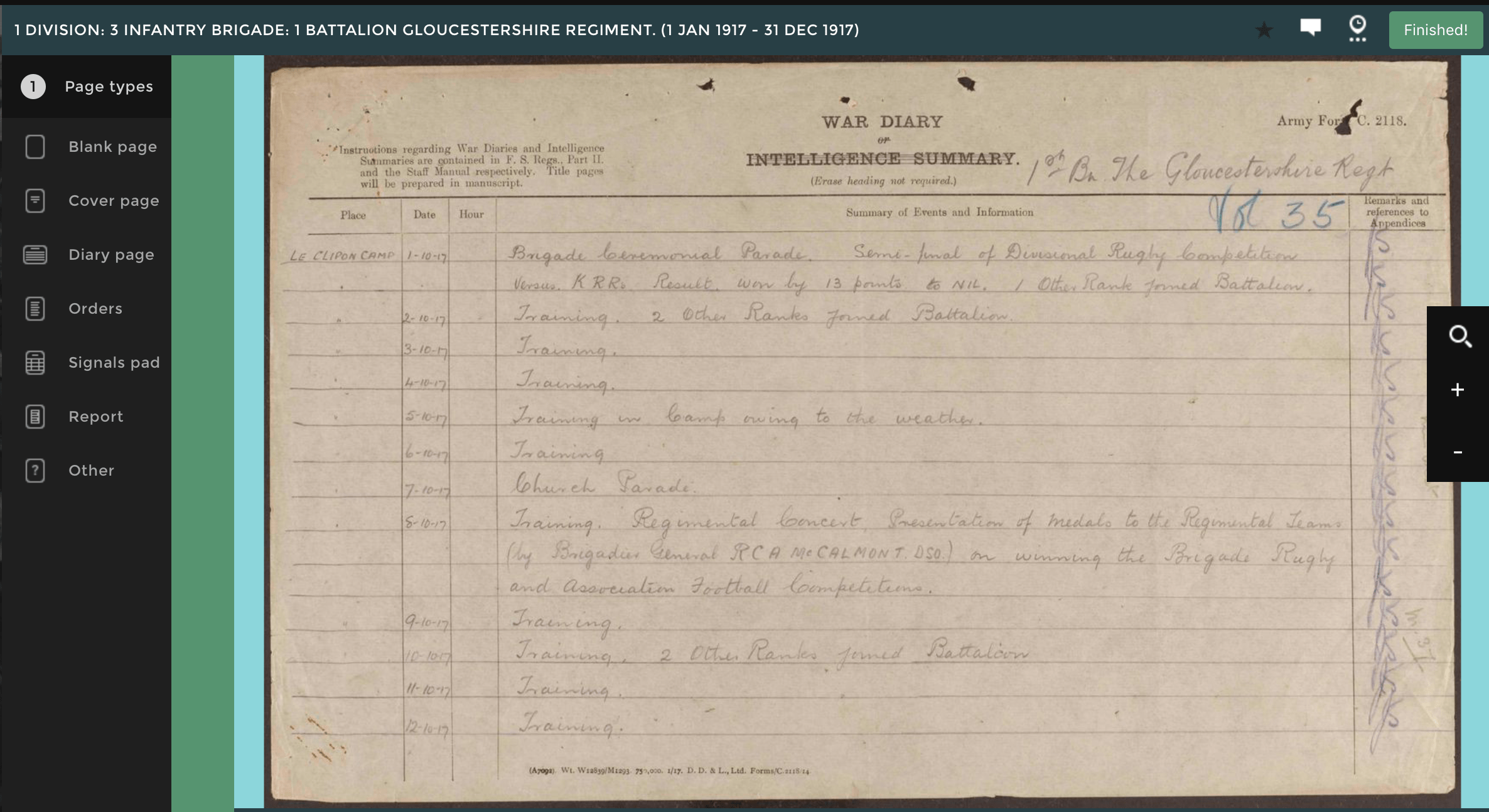 A typical diary page to be tagged

Why Keep Diaries And Their Use Today

Reading through the diary entries a lot of questions come to mind. Personally I cannot imagine the hardships and stress of combat that these soldiers had to endure. In one excerpt of the 1 Division: 3 Infantry Brigade: 1 Battalion Gloucestershire Regiment’s diary (the regiment I focused on), a small group of soldiers were given a mission to go into enemy territory and take control of an enemy outpost. As I read the entry I tried and failed to imagine myself as one of the soldiers as they undertook this dangerous task that could result in their death. They achieve the task with only one soldier wounded, however it is something I cannot relate to at all. We have been sheltered in Ireland from war, with the last major war in Europe being WWII a lot of my generation would have no experience of the everyday hardships of WWI.

In times of such chaos it amazes me how well kept these diaries were. They updated them regularly and kept a universal structure across the regiments. Place and soldier names are always written in full block capitals and a uniform terminology is used to describe events. For what purpose were these diaries kept so organised? Upon exploring the Operation War Diary site they explain why the diaries were kept. The two main reason were: 1. To provide an accurate record of operations for preparing the official history of the war, and 2. Collect information that would help make improvements preparing the army for war (Operation war diary, no date). It is interesting that at a time of war and chaos there is still the calmness of thought to correctly document the war for historical purposes. The second point is more likely reason for documenting the regiments activities. Looking back on the whole campaign in detail and see what worked and what didn’t, you can learn how to better manage a given situation. If you look through the history of war and how warfare is implemented today, it is completely different. Technology has made it a lot safer for the soldiers but in war there will always be lost of life and you cannot escape that.

The platform that Operation War Diary uses to tag the extensive collection of war diaries is built by Zooniverse. Most projects on Zooniverse use their purpose built platforms to retrieve the data. Having contributed work to another Zooniverse project called Understanding Animal Faces, where they are trying to get computers to be able to tell different animals apart, I can see the similarities in the tools used. In Operation War Diaries, it’s very simple to use and to navigate. The Understanding Animal Faces is even simpler and quicker to use, as the OWD has a lot more that they ask of you. It can take 30 minutes to fully tag a diary page where you could tag an animal’s face in 20 seconds. Looking into Zooniverse as a company, I found they employ many front end, back end developers and designers that build platforms that cater for the different projects. Exploring the projects on Zooniverse, I found they focus on building simple, easy to used platforms that are as fun and engaging as possible (Zooniverse, no date).

Reading the diary entries of the soldiers in the 1 Battalion Gloucestershire Regiment has sparked an interest in exploring my great grandfather’s and granduncle’s exploits in WWI and WWII respectively. John Joesph Hitching was part of the Allied Intervention Force sent to Northern Russia 1917-1919. After WWI he was station in Finland and later became some sort of liaison officer between the British and Finnish armies (History.com, 2014). My granduncle Gordon also fought in the British army but in WWII. Gordon was part of 1 Platoon of A Company, 13th (South Lancs) Parachute Battalion that took part in the Normandy campaign. He was killed as they landed in Normandy (Paradata, 2017). I have found some mentions of them online but information is scarce. This project has the power to give more information on the soldiers lives and exploits around war times and help families learn more about loved ones lost in the war. 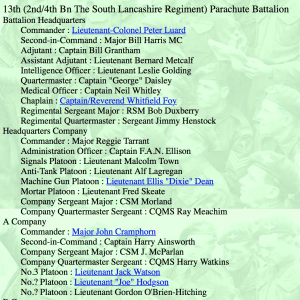 My granduncle’s regiment in world war 2

Working on Operation War Diary and with the Zooniverse has been fun and though provoking, it has shown me why this work is beneficial. When I started tagging diaries I wasn’t sure if I was doing it right and what all the different terms meant, however the forum page connected with the project was so helpful. You were encouraged to help each other out and share interesting diary stories found while tagging entries. The community working on this project helped me out on a couple of occasions when I was stuck or didn’t understand something. The knowledge that every diary page is being tagged by five different people also laid to rest any worries of the implications of tagging something wrong.

To conclude, my experiences contributing to the Operation War Diary and Understanding Animal Faces projects shows like with last year Humanitarian Open Street Map, that the power of crowdsourcing initiatives are incredible. I would love the data from Operation War Diary used in creative ways where anyone can create their own narrative using the data and visualise or contextualise the information in interesting ways. It does state on the website that all data produced by Operation War Diary will eventually be available free of charge(Operation war diary, no date). The only question is what form will it take? Will it be open source and free to remix and create your own narrative? If I am to take away anything from using Zooniverse that could be use in my own work further down the line, it would be that 50,000 heads are better than 1. Any large scale research I might need in the future, why not use crowdsourcing? Why not use the knowledge of others to help with a project? I think the days of solo research might be numbered, there is only so much knowledge one person has. The scale of work that can be done through crowdsourcing at a minimal cost makes it an important step forward in the way we work. Collaboration is the key to the future and through crowdsourcing collectively we can achieve heights never achieve before.