A critical response to “Storytelling is evolving”

Storytelling has been around since the birth of mankind in one form or another. At its most basic form, stories were told by painting wild animals or hand prints on cave walls. The interactions with these stories were limited to whoever happen to go into that cave and see the drawings. It has evolved a lot since then, and through the ages people have invented new ways to tell their story (“An Evolution of Mankind and Visual Communication.”, 2015).

Tools help #storytelling evolve but human interaction is @ the core of any #narrative we r the future #DHUCCTwessay https://t.co/noua3QRokR

In my twessay I wanted to express that the heart of every story will always remain intertwined with humanity, and the core value is the interaction between people. Everyone has a story to tell, they might not all be interesting or be expressed in the same way but we all have the ability to tell a tale. The part of storytelling that is evolving is the tools we use to tell our stories, from  the early forms like cave drawings, speech, written text, music, and dance; to more recent forms like film, tv, video games and trans media. The tools we use allow us to create different forms of storytelling. Now with the technological advancement and the creation of the internet, we have added a new form known as digital storytelling. 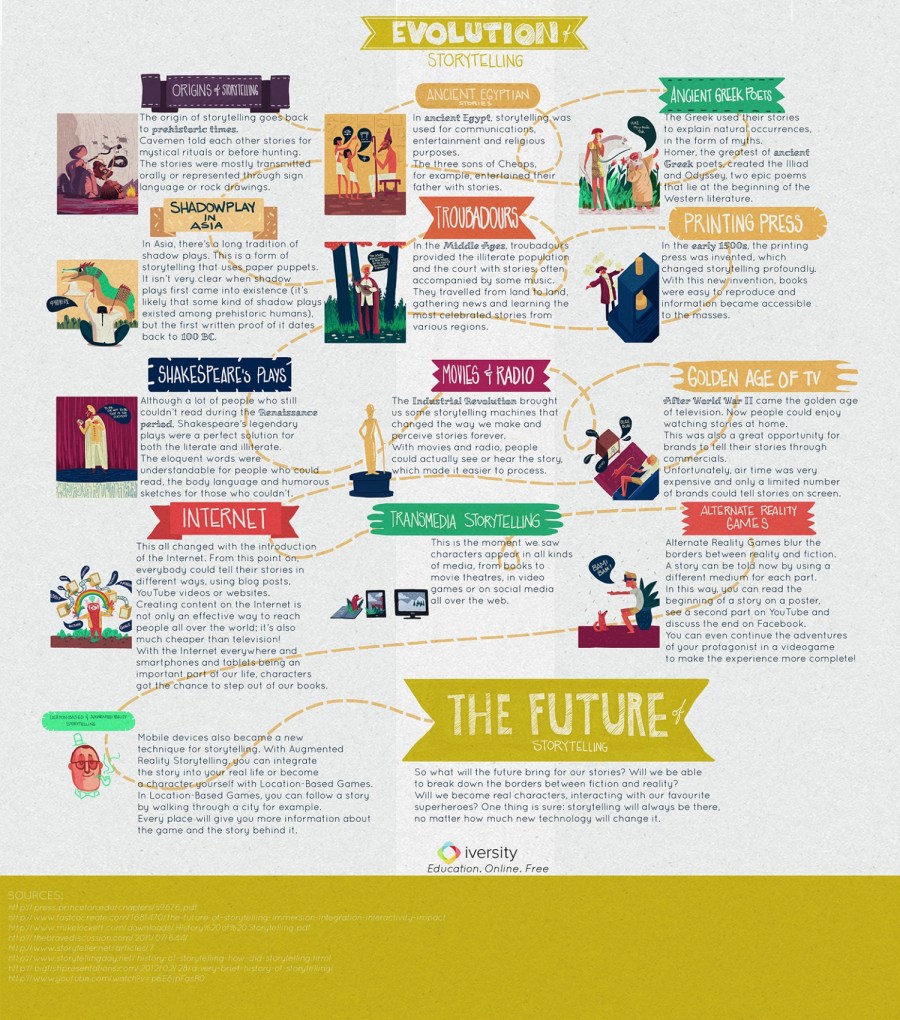 There were a lot of very interesting twessays on this topic from everyone in the class, and I have picked two of them to talk about. In the twessay posted by Denis, he talks about the values of storytelling and how access to storytelling is becoming easier through online resources. I would disagree with this statement from the point that storytelling as a whole is one of the easiest things to access. All you need is another person to interact with, a book to read or a pen and paper. It is at its basic form the one thing we have that is free and easy to do. He does have a point in the first part of his twessay, that the values stay pure. It connects with my point that human interaction remains at the core of any narrative, however the second part of his twessay I think focuses in on one part of storytelling, its digital form.

The richness and values of storytelling are staying pure but its accessibility is becoming far easier through online resources #DHUCCtwessay — DenisVaughan (@DenisVaughanUCC) November 19, 2015

In Arlene’s twessay, she approached it from the topic of language. She expressed that stories are spoken universally and that they break language barriers. She included a Gif from “Romeo and Juliet” and the famous line, “But, soft!, what light through yonder window breaks?”. She is using the worlds greatest storyteller to get her point across. And even though his writings are in early modern english language, his stories are understood globally and his stories are taught in schools and collages(“Shakespeare Resource Center – The Language of Shakespeare.”, 2015). Arlene’s twessay resonates with mine, on the principle that stories will always be true to a basic understanding, but that how we tell these stories evolve with our own advancement as people.

To conclude, storytelling is an important part of our lives and will remain being essential to our lives in the future. The methods of telling stories is always changing and are becoming more creative with the help of digital tools. In my twessay I included a link to a website that has a host of really interesting interactive stories using different methods of storytelling like audio, visual and text together to enhance the experience (“Interactive Narratives – The Best in Multimedia Storytelling and Multimedia Journalism.”, 2015). I can see storytelling in the future using many tools in unison to create epic interactive stories, however the simple stories will always remain.